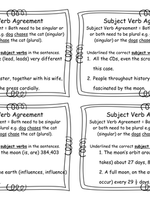 If the subjects are joined by and, you always use a plural verb. (Hint: one and one are always two.)

Mystery and fantasy are my two favorite genres.
My mother and my father are both home from work.

The exception to this is when and joins two nouns, but they are considered a single object.

If the subjects are joined by or or nor, you match the verb to the last subject in the list.

Sometimes the subject of a sentence can be hard to find.

In a question, the subject usually comes between parts of the verb. To find the subject, keep all the words and turn it into a declarative sentence.

Sometimes a sentence is inverted. The sentence begins with a prepositional phrase and the subject has been placed after the verb. Find the verb and ask yourself who/what did it? You can also rearrange the sentence by switching the part after the verb with the part in front of the verb.

Casey's Christmas present was two tickets to a concert.
The best time to call me is weekday evenings.
Are sports your favorite pastime?

Don't let yourself be tricked by prepositional phrases after the subject. Make sure you match your verb to the subject, not the object of the preposition.

The birds on the beach are seagulls.
That box of erasers belongs in my desk.

Hint: If you cross out the prepositional phrase, it is easier to find the subject.

The birds  are seagulls.
That box  belongs in my desk.